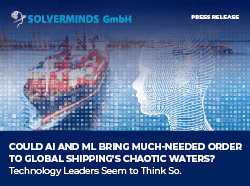 By Mohit Oberoi and Anthony Damian

With logistics problems plaguing the world’s supply chains, empty shelves, high prices, and disgruntled consumers seem to be the predicted forecast of this festive season. Liner shipping in particular is feeling the brunt of this pressure, what with massive, prolonged congestion and delays at many of the world’s major ports, global equipment imbalances, and volatile service disruptions.

Could artificial intelligence (AI) and machine learning (ML) technologies be the sought-after hand at the helm to steady the ship? Founders of Solverminds, Mohit Oberoi and Anthony Damian, believe it is, and said as much in today’s webinar.

Solverminds, the trusted technology that buoys many of the world’s largest liner shipping organizations through bespoke, robust solutions such as maritime-specific ERP, stowage optimizations, and AI-powered lashings solutions, discussed the many risks at sea.

Solverminds outlined the cracks in the system faced by cargo shipping organizations that are even more exposed to risk under the added strain of an overburdened system.

Impacted schedule reliability.
The unusual combination of an unprecedented surge in demand for goods plus travel restrictions, both due to Covid, plus infrastructural bottlenecks at ports causing delays at ports and with shipping, has resulted in schedule reliability being brought into question. The question is, how can liner shipping ensure that the disruptions in the supply chain have minimal impact to schedule reliability?

Misdeclaration of weight.
Recognized as an industry-specific problem, misdeclaration of weight causes considerable difficulty for cargo stowage planners, who rely heavily on the cargo details declared by the shippers. If numbers are inaccurate, or even deliberatel incorrectly declared, the integrity of container stacks may be jeopardized, resulting in the collapse of container stacks and even loss of stability.

Risk of wrong stowage of DG goods.
Container ship fires, due to wrong stowage of dangerous goods (DG) cargo, is a problem for the entire shipping industry that exposes the crew, cargo, environment, and vessel to considerable risk. This could be due to undeclared or mis-declared dangerous goods due to non-acceptability of certain DG for commercial reasons. Poorly packed DG in containers due to shippers being unaware of packing, carriage regulations of DG cargo, and DG segregation rules not being followed.

Collapse of on-deck container stacks.
Container stack collapse represents a grave threat to crew and ship safety and to the environment, explained the Solverminds founders. The shipping community and their insurers have suffered substantial financial losses during the last years as the number of container stack collapse cases resulting in loss of containers at sea is increasing, both in terms of frequency and severity. This is due to lashing forces not accurately accounted for, inadequate securing of goods, twistlock failures, and lashing becoming loose.

RISK MITIGATION THROUGH AI AND ML

“Demand is now growing for AI and machine learning tools that understand patterns and perform advanced statistical analysis to predict outcomes, optimize decision making and powerfully visualize data,” said Oberoi. The disruption in ports of Los Angeles resulted due to the large dwell time of containers. This is due to a surge in demand, and with limited space at terminals, and with fewer trucks and stevedores to clear the backlog, the problem escalated. What could have been done was to forecast the vessel arrivals with the teus each vessel is bringing. Hybrid solutions where forecasting of vessel arrivals, incoming teus, and truck / chassis forecast, is combined with Optimization engine to create a what-if solution, where terminals / shipping lines can study the outcome of different scenarios. He further explained that artificial intelligence can adapt to meet ocean shipping industry needs by analyzing usage patterns among various data sources or general guidelines within a sea of information.

“With this information,” he continued, “AI generates real-time prediction models that allow stowage planners, equipment planners and vessel route planners to predict and prevent eminent bottlenecks. It can also quantify expected outcomes across different scenarios, highlight unforeseen abnormalities, and schedule more optimal alternatives in the event of an interruption.”

Achieving schedule reliability.
Every Liner service is planned with proformas that define the port rotation, time at sea for each port pair legs, and time loading and discharging at ports. The schedule delays can be classified into a) delays related to vessels at sea, b) delays at port and c) delays due to other uncontrolled events. The data of the vessel’s past schedule is important information, which when profiled over long periods, can be used in AI / ML tools to perform predictive analytics. Data profiling using statistical analysis, clustering and decision tree can identify important variables that influence the vessel delay at sea / port. Profiling is then done of each variable and ML is used to identify the probability of an event occurring that may result in vessel delay. Furthermore, the same information can be fed further into querying the quantum of vessel delay in hours / days. Team at Solverminds (SVM) use a combination of SEDGE (AI/ML platform) for profiling as well as OptiFleet (Optimization engine) to simulate various proformas, vessels combinations, and port rotation in order to arrive at the most optimal route to plan the liner voyage and generate schedule.

Preventing stack collapse.
Misdeclared / undeclared weight of containers plagues the Liner industry even after implementing the verified gross mass (VGM) rules. It is estimated that around 2% of the containers for a ship, even after having a VGM, have weights exceeding 1 ton. These discrepancy in the weight can lead to stability issues or stack collapse. Predictive analytics can be used to predict the container weight. Machine learning can also predict which containers will have a higher probability of mis-declared weight.

Optimize time at port, using Stowage optimization.
Time at port depends on the number of containers to load/discharge, the number of available cranes, crane productivity, the number of restows, and optimized container stowage. To minimize the time at port, the above mentioned variables need to be optimized, not in isolation, but in a consolidated manner, taking into account the forecasted load / discharge of cargo for the full voyage, creating block stows which match the available cranes, and optimized stows which reduce the time of the vessel at the terminal. SONATA is the container stowage optimization tool which considers multiple constraints and plans optimal stowage plans, reducing the ship’s time at port

Achieving asset utilization.
Empty container logistics is an important part for Liner shipping to maintain minimal stock, and at the same time, provide empty containers to customers to meet their demand. The return of empty containers to demand locations in time and with minimal cost is important. Equipment repositioning Optimizer (OptiBox) helps in planning the repositioning of MT containers, based on the surplus and deficit of different equipment types at various locations, all the while minimizing costs and transit times.

Identifying undeclared cargo.
One of the challenges is undeclared dangerous goods (DG) cargo, which can compromise the safety of life and vessels. Innovative use of Natural Language Processing techniques such as Named Entity Recognition have been used to identify the “suspect cargo”. A typical solution by a Shipping Line would be to use word indexes, however contextual text in the body of the BL, with information about the shipper, consignee, POL, POD, and commodity details, can predict bookings / containers which may contain undeclared DG cargo.

“Optimization through AI-powered tools provides a range of options that enable users to do comparisons of the different scenarios to determine which situation is optimal,” concluded Anthony Damian. Combination of Hybrid solutions using AI/ML and Optimization engines, are now providing innovative solutions, and are the new paradigm shift for liner shipping. Optimization in the ocean shipping industry is the new benchmark in vessel stowage planning, liner fleet scheduling, and in reducing global container imbalance.”

The webinar wrapped up by showing how liner shipping companies that want to take advantage of optimization algorithms provided by this technology will get a clear view of the field and make better decisions, minimizing liner operational delays and ensuring customer satisfaction.

We use cookies on our website to give you the most relevant experience by remembering your preferences and repeat visits. By clicking “Accept All”, you consent to the use of ALL the cookies. However, you may visit "Cookie Settings" to provide a controlled consent.
Cookie SettingsAccept All
Manage consent

This website uses cookies to improve your experience while you navigate through the website. Out of these, the cookies that are categorized as necessary are stored on your browser as they are essential for the working of basic functionalities of the website. We also use third-party cookies that help us analyze and understand how you use this website. These cookies will be stored in your browser only with your consent. You also have the option to opt-out of these cookies. But opting out of some of these cookies may affect your browsing experience.
Necessary Always Enabled
Necessary cookies are absolutely essential for the website to function properly. These cookies ensure basic functionalities and security features of the website, anonymously.
Functional
Functional cookies help to perform certain functionalities like sharing the content of the website on social media platforms, collect feedbacks, and other third-party features.
Performance
Performance cookies are used to understand and analyze the key performance indexes of the website which helps in delivering a better user experience for the visitors.
Analytics
Analytical cookies are used to understand how visitors interact with the website. These cookies help provide information on metrics the number of visitors, bounce rate, traffic source, etc.
Advertisement
Advertisement cookies are used to provide visitors with relevant ads and marketing campaigns. These cookies track visitors across websites and collect information to provide customized ads.
Others
Other uncategorized cookies are those that are being analyzed and have not been classified into a category as yet.
SAVE & ACCEPT
Book a Demo
Book a demo